Top 10 Things to do in Flores

An introduction to Flores

The Portuguese named the island of Flores, unlike most islands in the Indonesian archipelago. It comes from Cabo de Flores (Cape of Flowers), the Portuguese term for the eastern part of the island.

This part of the island, originally called Kopondai, got its name from the Portuguese. The reason behind the name was the flowering Delonix regia trees that are found there.

Komodo National Park, which hosts one of the best places in the world to go diving, is inspiring Flores to become the new upcoming hotspot in Indonesia. It’s no surprise you can expect crystal clear waters as well as pristine sands. There’s also a huge number of underwater creatures that call Flores home, including sharks, turtles, and rays.

Many visitors to Indonesia never make it this far down the chain of islands. But if you are an explorer it’s worth checking out this part of the country. Besides the diving opportunities, you can also spend time in national parks or marvel at multi-hued lakes. Flores is also the home of the fierce Komodo dragon. In short, whether you want to explore the land or the sea, there is more than enough to keep you busy in this fascinating part of the world.

10 Things to do in Flores 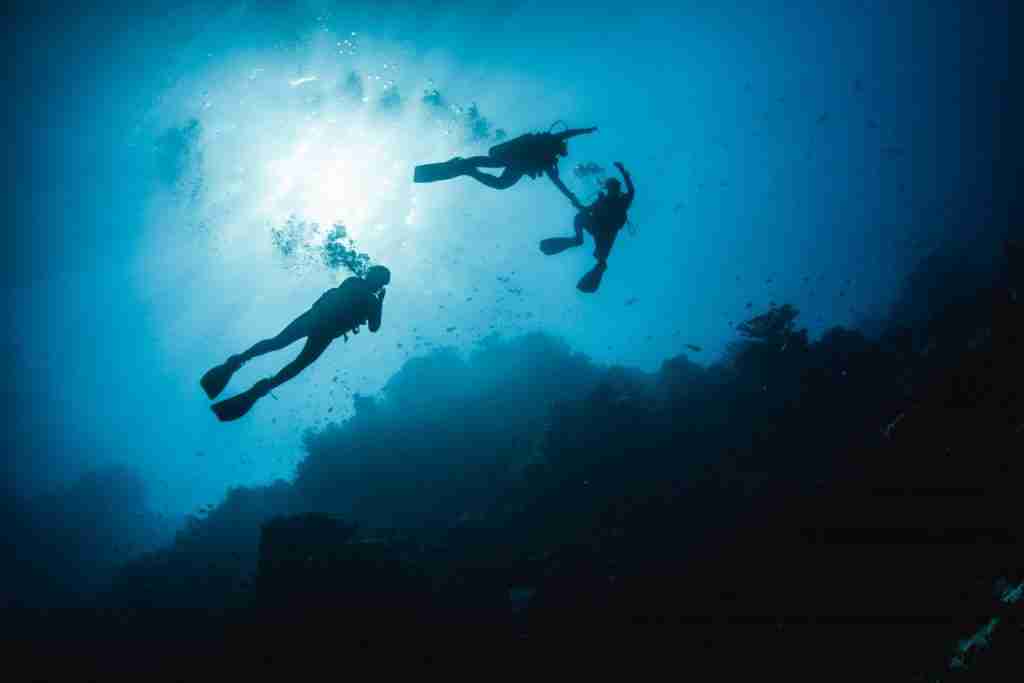 The main draw to the Komodo National Park is the Komodo dragons. Komodo is rugged, adventurous, and packed with the promise of excitement. Komodo is also one of Indonesia’s most famous diving destinations. Manta rays, sharks, immense schools of fish, and colourful healthy reefs are just a few of the stars of Komodo. Komodo is also a popular liveaboard destination. But booking a day trip and thus driving back to the harbour of Labuan Bajo at the end of the day offers amazing sunsets over the bay, night after night. Komodo is well known for its currents, which attract all sorts of pelagic fish.

2. Meet the Komodo Dragons on Rinca Island or Komodo Island

Not only is the Komodo dragon the national animal of Indonesia, but it’s also the biggest living lizard in the world. Situated between Sumbawa and Flores, the islands of Komodo and Rinca are the main attractions of the Komodo National Park. The Jurrasic-like islands rugged hills, carpeted with savannah and wired with mangroves, are exclusively home to the prehistoric Komodo dragons.

Most tourists choose Rinca to observe the mighty Komodo dragon. Rinca occupies only 123 square miles and aside from a tiny fishing village, the island is completely undeveloped. Rinca is the perfect home for exotic and exclusive wildlife. Dense forest gives way to grassy fields and a few scattered watering holes where the Komodo dragons hunt for prey.

Far fewer tourists visit Rinca than the neighbouring Komodo Island. Although never a guarantee, the chances of spotting dragons in the wild is much better on Rinca than on Komodo. With a little luck, you may find only yourself and a guide – armed only with a stick – wandering the bush in search of Komodo dragons.

Komodo Island often steals the limelight in Flores. But if you are in the area, then a trip to Padar Island is also well worth the visit. The big draw on Padar Island is the beaches, which light up in three different colours (black, white and pink), and the lookout point. If you Google Komodo National Park, there is a 90% chance you will end up seeing a picture of Padar’s lookout point. It is definitely the most Instagrammable spot in and around Flores.

It is easy to get to Padar Island from neighbouring Labuan Bajo. You can trek all over the island on a variety of trails. If possible, plan to go across in the morning and go trekking when the weather is a bit cooler. In the afternoon you can make your way down to the beach for a nice cool swim. Another good time would be right before sunset when the temperature is not too hot. The view from the lookout point is stunning.

4. Marvel at the lakes of Kelimutu in central Flores

On the main island of Flores, you’ll find the biggest attraction that Flores has to offer. Kelimutu is a volcano located close to the authentic town called Moni. This unique town is located in the central part of the island. Unlike other volcanoes in Indonesia, the volcano itself isn’t that special. It’s the three crater lakes huddled inside the mountain that will bring a sparkle in your eyes.

The lakes each have a different bright colour. There is a red, blue, and green lake. It’s said that different gasses bubbling under the surface create this stunning prodigy of nature.

The most amazing thing is that it?s possible for visitors to hike up to the lakes, and camp close to the crater. This will allow you to witness one of the most amazing sunrises you will have ever seen. You’ll gasp when the sun slowly rises above the rim, and the dark grey lakes turn in to bright blue, green, and red colours.?

5. Gaze at the spiderweb fields in Cancar

One of the things you can do on Flores is to visit the spider web rice fields in Cancar. Even though it has a scary ring to its name, you will not find an abundance of spiders here. The reason why the fields are called spiderweb fields is because of their shape.

The fields in Flores are called ‘lingko’ or ‘spiderweb fields’. This is due to the fact that the rice terraces are arranged in a spiderweb formation. Each part of the web is assigned to a different family in the area. Depending on the wealth of the family, the larger their piece of the spider web.

One of the best places to see them is in Cancar which is close to Ruteng. The best way to visit the spiderweb formations is to rent a driver who will know the perfect vantage points. From these points, you can admire this amazing feat of design. You can also easily rent a scooter, and explore the rice fields by yourself. The last option is to jump in a Bemo (a small taxibus) as they frequently head to Cancar from the market in Ruteng. From the terminal in Cancar, it is about a 1km walk to the viewing point in Cara Village. While passing through the village, you are expected to stop at the adat house, to sign the guestbook and leave a small donation.

This massive cave was the site of an unexpected archaeological discovery in 2003. During that time the skeletal remains of a small humanoid were unearthed.

At 106 centimetres in height, the adult female skeleton dated back to only 18,000 years ago. But it was similar in stature and development to fossils dating back more than three million years. This discovery contradicted ancient theories surrounding the history of human development. One theory is that this humanoid was related to Homo erectus, an ancient African export that fell to the bigger brains of Homo sapiens. It was the isolation of Flores allowed them to survive far longer.

What isn’t up for debate though, is what ended their existence. Similar to what caused the extinction of dinosaurs, a giant volcanic eruption put an end to their survival. There is a small museum on-site and while the displays are only in Indonesian, they’re easy to make sense of. The cave itself, hobbits aside, is impressive and the scenery along the way is just beautiful.

Wae Rebo is an old Manggaraian village, situated in a pleasant, isolated mountain scenery. The village offers a unique opportunity to see authentic Manggarai housing. It gives you an amazing experience to witness the everyday life of the local community. In the village of Wae Rebo, you can see mbaru niang. These traditional, circular cone-shaped houses with very unique architecture are what makes Wae Rebo so special.?

A village visit involves a splendid but challenging 9km hike. It takes three to four hours and winds past waterfalls and swimming holes, as well as spectacular views of the Savu Sea.

There is not an official entrance fee, but a donation of 200,000Rp per person is expected for a visit. Or 320,000Rp if you stay overnight in a mbaru tembong (a traditional house). The next morning you can either retrace your steps. The other option is to hike another six hours over a pass to another trailhead.

Rangko Cave is a rocky ocean cavern that’s located about a one-hour scooter drive from Labuan Bajo, Flores. Filled with crystal clear water, and if you are there right time (between 12.00 – 15.00) the water lights up to a bright turquoise colour. This is the result of sunlight shining through the mouth of the cave. You can swim, cliff jump, and admire the otherworldly beauty of the stalagmites.

You descend into the cave through its wide mouth, and then climb down the rocks to the pool. Once in the water, you can swim back into the dark. This is where the cave opens into a large, round cavern. Here where you can climb up the rocks, and for the daredevils jump down again.

Cunca Wulang is about one hour from Labuan Bajo by scooter. It’s a beautiful scenic route that takes you through some amazing local towns. At the end of the drive, you are rewarded with a gorgeous lookout over the Flores coast.

The hotspot is nestled in the foothills of Mount Mbeliling rainforest. This limestone waterfall and canyon is a delightful spot to spend a few hours, or take a picnic and stay the entire day. Most of the year, Cunca Wulang is a pleasant series of freshwater pools sandwiched between high limestone cliffs. An easy climb up on of the limestones offers you a spectacular cliff jump that drops down about 5-6 meters into a deep river.

Over centuries, water has eroded some interesting formations into the cliffs. This includes several small, watery caves. Lower down the river, the high canyons widen out into a series of cascades. These cascades stretch for several kilometres towards the bottom of the valley

10. Climb up Love Hill and watch the famous Komodo sunset

Love Hill sits just outside to Labuan Bajo and people flock here for the sunset. If you are visiting Labuan Bajo, then it makes sense to tour the town first. Then make your way here in the early evening. You’ll want to be in time for the gorgeous sunset views over the rest of Flores.

You will share this amazing spot with many local visitors and other travellers. But it’s without a doubt one of the best spots to witness the astonishing sunsets over Komodo National Park.

From the top of Love Hill, you can see tropical forests, picturesque hills, and the azure waters of the pretty Flores Sea as they unfurl in front of you.

To sum it up, Flores has more to offer than most visitors might think. The Indonesian government especially focuses on the Komodo National Park and Labuan Bajo, as there is some amazing history on this island. It’s a great destination for adventurous travellers, but the infrastructure and diversity in things to do also make it suitable tourists who are looking for a bit more comfort.