When it comes to muck diving, the devil’s in the detail. Investigating the ocean floor for macro life can become an enthralling and exciting activity. It’s easy to lose yourself on the search for the smaller marine life that you can find in sheltered bay areas of the sea. A ‘muck dive’ is always a site where there is no reef and consists mostly of a soft sediment base. At first glance, it looks like nothing special, just a sandy, or seaweed-covered bottom, sometimes littered with trash. However, these areas provide places for small marine life to thrive without fear of being hunted by larger predators. Muck diving offers rare opportunities to find marine life that dwell specifically in this kind of habitat, the small macro life that cannot be found on a regular reef dive.

In Komodo National Park, we have several dive site locations for muck diving;

Wainilu and Siaba Besar – Located in the central part of the park.

This is Manta Rhei?s (but by no means definitive) list of curiosities that you may come across whilst diving these sites with us.

The Blue-Ringed Octopus refers to a genus of species that are distinguished by their bright blue circular patterns. These creatures are small, growing only up to the size of a golf ball, however, they are amongst some of the most venomous animals in the world. One single bite can lead to complete paralysis, blindness, nausea, loss of senses and death within minutes if left untreated. However, don’t fear these creatures, they are generally a very gentle species and never attack unless provoked.

Sea Horses come under the genus of ‘Hippocampus’ is derived from two Greek words; ‘hippos’ meaning horse and ‘kampos’ meaning sea monster. Their ineptness when it comes to swimming is due to their unusual body shape combined with very small fins and can easily die of exhaustion if caught in a current. Very few predators hunt these small creatures as they are too bony and indigestible. By swimming upright and mimicking the look of seaweed, they are able to avoid predators quite easily. Sea horses mate for life, meaning they are one of the very few animals that are monogamous.

Their name nudibranch translates directly from Greek into ‘naked gills’. Currently, there are around 2,300 known nudibranch species, ranging in a wide variety of colour, shape and size. Interestingly, nudibranchs are hermaphroditic creatures, meaning they have both male and female organs. Nudis may look like the cutest Pokemon you’ve ever seen, but don’t be fooled. Some species are known to harbour toxic secretions and stinging cells. Some nudibranchs are photosynthetic, feeding off of glucose that is produced through photosynthesis. On the other hand, some are cannibals, feeding off each other using their teeth or digestive enzymes. Thriving in both warm and cold water, your chances of spotting a nudi is relatively high. However, keep your eyes peeled as these beautiful creatures can be well camouflaged. 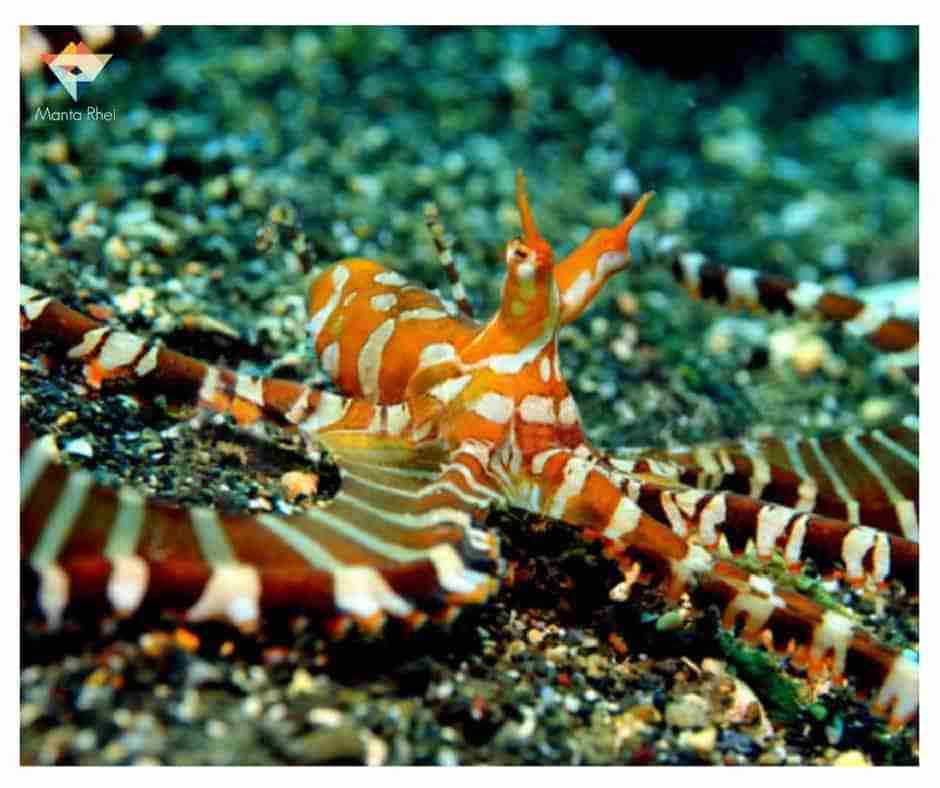 The wunderpus octopus was named after the German word ‘wunder’ meaning wonder, miracle or marvel. This octopus is most often of an orange-red-brown colour and striking white spots or bars that extend the length of its arms. There are two theories that explain these vividly patterned creatures. One suggests that it is a warning for predators, letting them know that it’s toxic. Another theory suggests that the wunderpus octopus is mimicking other deadly banded animals such as the lionfish or sea snake as a means of defence. 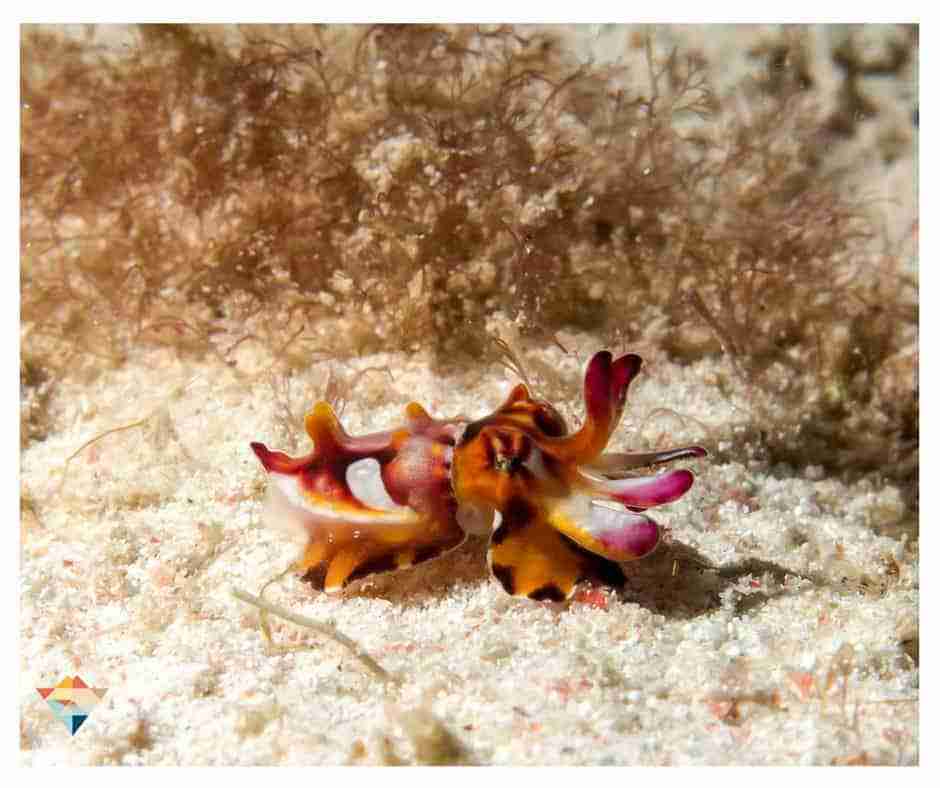 Despite its name, the flamboyant cuttlefish is one of the most toxic creatures in the ocean. Their flesh contains a highly toxic substance, which science does not completely understand yet. The name flamboyant comes from their unique and brightly coloured appearance, which screams ‘don’t eat me, I’m toxic!’. Cuttlefish as a species get their name from their cuttle bones, this porous structure allows the cuttlefish to manually control their buoyancy. Having one of the greatest brains to body ratios, cuttlefish are amongst the most intelligent of invertebrates. Their natural predators consist of sharks, fish, dolphins and even other cuttlefish.

Zebra crabs are a minute genus of striped crabs that reside within sea urchins, particularly fire urchins. They have distinctive striped bodies, growing at most to roughly one inch in size. Zebra crabs are very peaceful in nature, choosing to feast on the spines of fire urchins, which does the urchins no harm.

Even though it’s incredibly exciting to see bigger marine life like Mantas, sharks and turtles, it?s important to keep in mind that the little things matter just as much. Having such a stark difference in dive sites keeps things fresh and interesting. At Manta Rhei we enjoy creating balance for our customers, to be able to enjoy all the wonderful sites that Komodo has to offer.

Just a small side note for all you muck diving aficionados out there:

One of the best muck diving locations in the world can be found close to Sulawesi, in Lembeh. Coined as the ‘muck diving capital of the world’ it is one of very few places where you can find rare marine life such as the mimic octopus, pygmy seahorse, hairy frogfish and flamboyant cuttle fish all in the same place. So what are you waiting for, cross this place off your muck diving bucket list!