Is that an octopus? No, the tentacles are shorter and each side of the body has a fin which undulates, propelling it forward. It’s a cuttlefish!

Cuttlefish are found all over the world, with over 120 species discovered (and more to come). Further, they are cephalopods, closely related to squid and octopi. They range dramatically in size and colour, and are also known for cuttlebones, which are an internal structure that helps them stay buoyant. These bones are often washed ashore after cuttlefish die and are sometimes collected and given to pet birds as a calcium supplement. 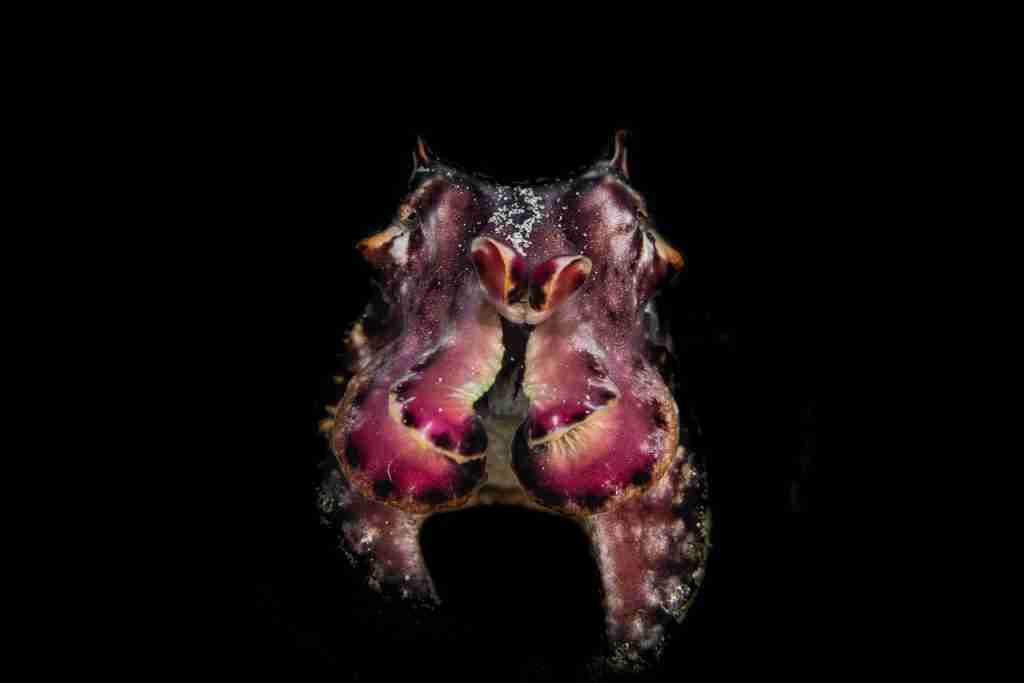 Cuttlefish vary dramatically in size, but have a large soft body and eight short tentacles. In Indonesia, you may run into the flamboyant cuttlefish. However, be careful as the bright colors are nature’s warning. Flamboyant cuttlefish are poisonous. They don’t sting, but they are quite poisonous to eat. They also have the unique habit of walking along the seafloor.

Cuttlefish tend to swim slowly above the seafloor, with the tentacles at the front end. This gives them the appearance of a wise creature of the deep. Cuttlefish are commonly caught and eaten; with no species of cuttlefish being endangered. Some species can be quite large and coming face to face with one can be an awesome experience.

Like other cephalopods, cuttlefish have chromatophores in their skin which allow them to use colour to blend into the environment or to communicate. Because of this, cuttlefish can vary dramatically in colour, and you may even see their colours shift to match the seafloor beneath them. This can make them hard to see and they have been known to give divers quite a surprise. 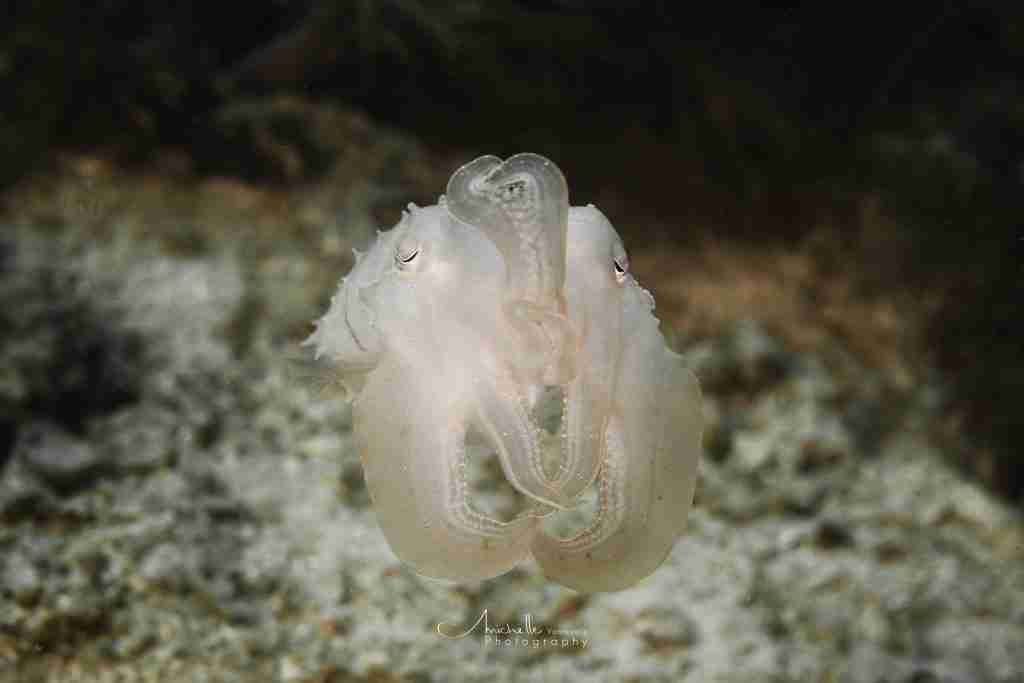 Where Do They Live?

Cuttlefish prefer shallow water and are often found close to the coast and above reefs. They are seldom found at depths of below 650 ft. Indeed, they care more about whether the water is shallow than what the seafloor is made of. However, some species prefer reefs while others prefer shallow plateaus. They generally do not have burrows or other homes.

What Do They Eat?

Cuttlefish are both predators and prey, and use their colour changing ability to ambush small fish and crustaceans. Also, they will eat smaller cephalopods. Basically, they will eat anything they can catch. They catch their prey by using their tentacles, which they use to move the food to their mouth.

Cuttlefish are not a threat to humans or other large sea creatures. Indeed, they are more likely to hide if startled. However, a cornered cuttlefish may squirt ink as it uses water held within its body to shoot away. Cuttlefish ink is brown rather than black. To be specific, it is ‘sepia’, with the name of that color coming from the family name of cuttlefish, Sepia. This ink has long been used in art and as a propulsion trick to catch prey. 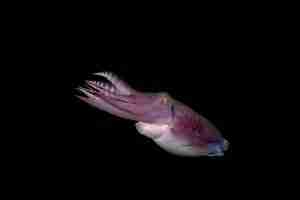 How Do They Reproduce?

Cuttlefish males engage in display behaviour to gain access to females. Males can be seen rippling and flashing colors, with the smaller and less impressive male generally backing down.

Some males, however, engage in a behaviour called female impersonation. These are smaller males who will sneak up on a female, disguise themselves as another lady, and mate quickly before the larger males see them. The females don’t seem to mind. However, sometimes another male will come along and literally wash out the first male’s sperm before the female can fertilize her eggs.

Further, cuttlefish mate head to head. After mating happens, the female allows the sperm to fertilize eggs held in a pouch just below her mouth. She may have sperm from more than one male and will carefully choose which sperm she uses. Then, she lays her eggs in a safe space and then dies. (Cuttlefish live only a couple of years and mate at the end of their lives.)

A female cuttlefish will lay anywhere up to 1,000 eggs. The eggs will eventually hatch into very small cuttlefish, which look like miniature adults and then grow rapidly. Needless to say, cuttlefish don’t take care of their young.

Coral reefs are the one of earths most complex ecosystems, containing over 800 species of corals and one million animal and plant species. Here we see a shallow coral reef consisting mainly of hard corals, with three Pharoah Cuttlefish (Sepiida). The female is brown and underneath. Meanwhile two colourful males are fighting for the right to mate with her. This rare image of such animal behaviour was captured in the Andaman Sea, Krabi, Thailand. 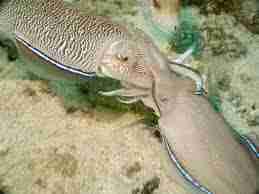 Where in the World Can You Find Them?

All over the place! Cuttlefish are found in temperate and tropical waters around Europe, Asia, and Australia. However, there are no cuttlefish species in the Americas. This is likely because they don’t handle deep water well and find the Atlantic and Pacific oceans to be uncrossable barriers. Thus, this provides a unique opportunity for American divers who are more used to the Caribbean. Different species live in different regions, but there are cuttlefish in many places, including as far north as parts of Scandinavia.

But What About in Komodo National Park?

As already mentioned, one distinctive species found in the park is the Pfeffer’s Flamboyant Cuttlefish, a brightly-colored, small creature that ‘walks’ along the seafloor. Unlike other species of cuttlefish, they do not swim well.

However, a variety of typical cuttlefish are also found in the shallow waters in the park, including the Pygmy cuttlefish and the broadclub cuttlefish. The broadclub is the second-largest cuttlefish in the world with a top weight of at least 22 pounds. You can expect cuttlefish at any of our dive sites, but you’re most likely to see them in very shallow water where reefs come close to the surface, such as at Castle Rock and Mawan. Because they blend into their environment, even the larger ones can sometimes be harder to see, but if you pay attention you should be able to have a cuttlefish encounter.

Let your diver know if you are interested in seeing cuttlefish, with the flamboyant cuttlefish being a slightly different case. They can help you spot these creatures (even when they do their best to hide). Be aware, they can sneak up on you! They are found throughout the park and at many of our dive sites, so you have a good chance of seeing one on your next diving trip. 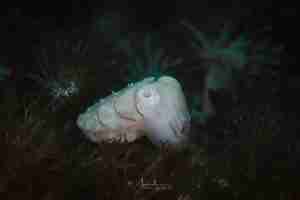 PrevPreviousHow to Start an Amazing Adventure: DSD or Open Water?
NextWhy will Labuan Bajo be the next Hotspot?Next