If you’re here, it must be that the tales have reached you from afar. Tales of a lost land where dragons still roam. Songs of an island archipelago bathed in a deep royal blue sea. Stories of turtles, sharks and mantas gliding past by the dozen.

Yes, the tales are true, Komodo is all that and more. Besides boasting some of the world’s best diving, it?s home to spectacular sights such as the view from Padar Island, the famous Komodo dragons and a thousands-strong colony of flying foxes emerging at sunset.

With so much to do, you may be wondering how you’ll have time to see everything. Fear not. for those of you short on time, we have compiled a list of Central Komodo?s most spectacular dive highlights. These are sites that boast spectacular diving all year round, unlike those in the North and South which can vary depending on the season. Use this guide to make sure you visit the best spots if youre short on time.

There’s a near-guarantee of getting up close with green sea turtles at Siaba Besar.

Since it?s also a relatively shallow and easy dive in a bay sheltered from currents, it?s become one of Komodo?s most popular dive sites. The turtles are often found resting at cleaning stations, waiting seemingly in a happy trance as cleaner wrasse and surgeonfish peck away dead skin and parasites from their carapaces.

The cleaning stations are located on two beautiful coral pinnacles which also teem with a variety of other creatures ? sweetlips, trumpetfish, and unicornfish are regular sightings here.

Image of sweetlips courtesy of A. Voinigescu.

But Siaba is more than just a coral pinnacle dive. The green turtles are also attracted to seagrass, their primary food source, in the neighbouring bay. Here, the sandy bottom might seem devoid of life. but it’s in fact the location of one of Komodo’s best muck dives.

Macro lovers will be delighted by the unpredictable variety of small creatures that can be found here by the trained eye: from ghost pipefish, frogfish, and flounder to leaf scorpionfish, sea moths and even the occasional flamboyant cuttlefish, Siaba has it all.

A flamboyant cuttlefish spotted in the muck.

Mawan is considered one of the most beautiful islands in the Komodo archipelago. ?

It’s a tiny postcard-worthy outcrop of jagged rocks, isolated white sand beaches and hills. The crystal blue waters that surround it don’t fail to impress either.

If the tides are favourable, you and your dive group can jump up current of the protected side to a coral bowl where sharks lie sleeping. Next, you’ll drift gently over some of Komodo’s most gorgeous coral gardens, often spotting blue-spotted stingrays, parrotfish and clownfish to name but a few.

But for many, the high point of the dive is in the sandy slopes at the tip of the island. This area is protected from the current, but it may seem to contain little more than some small aggregations of soft corals. In fact, it is the auditorium for one of the National Park?s greatest spectacles. 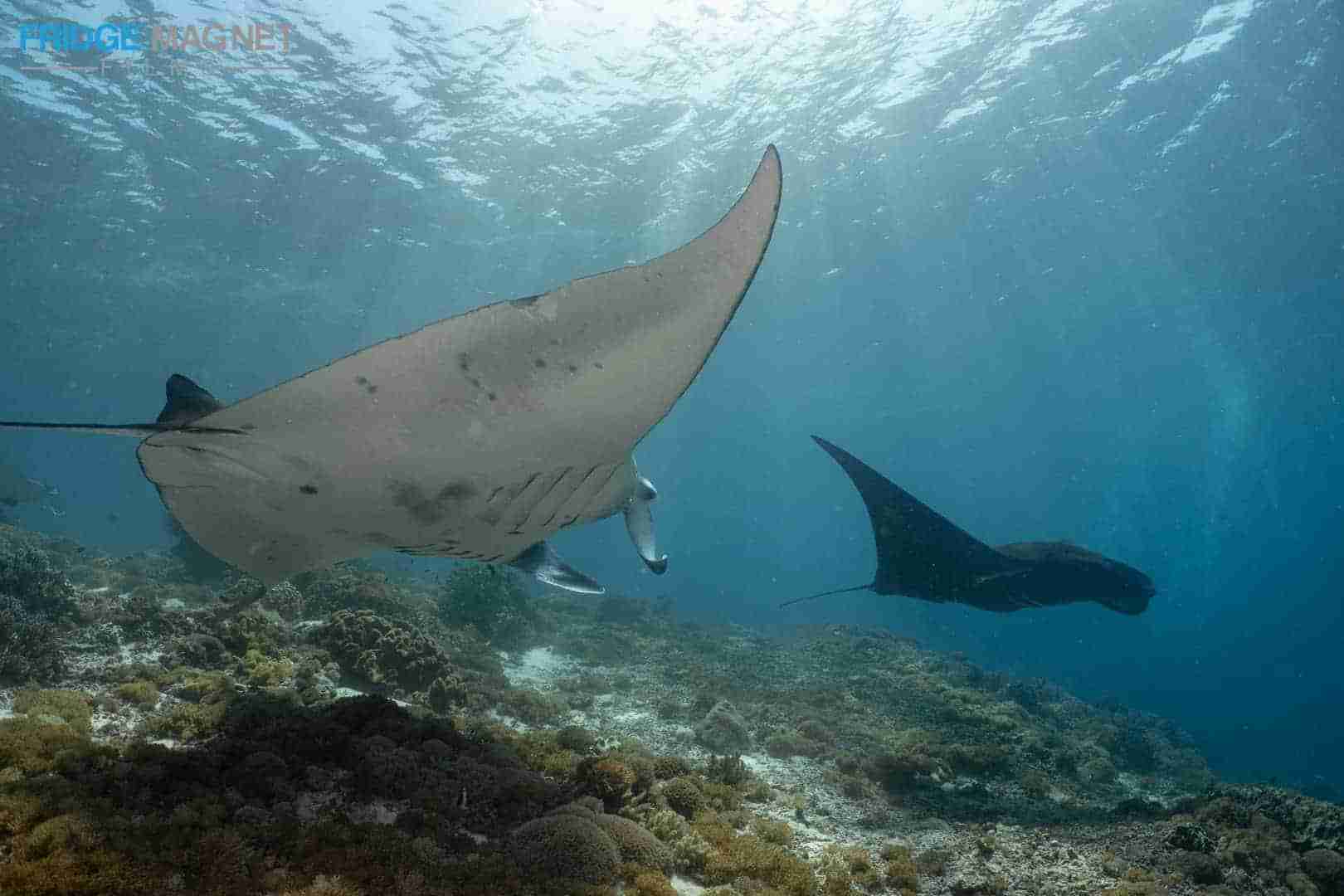 Here, if you are lucky, reef manta rays will glide effortlessly in from the blue to hover, turning and swirling, over coral bommies jutting from the sand ? cleaning stations. On such days, you can simply deflate your BCD, kneel in the sand, and watch as sometimes over half a dozen mantas swoop in and out of the cleaning stations just a few metres away.

Just relax and be transported by Komodo?s flow.

The idea of drift diving makes many divers nervous, particularly if they’ve never tried it before. If you’re one of them, Tatawa is the medicine to soothe your worries. No matter the strength of the current on the day, this dive site is an easy glide along a beautiful sloping coral garden with a variety of intense colour.

All you have to do is face the island and let yourself be transported along.

If the current is strong on the day, you have to spend almost no energy at all, enjoying the sensation of flying over the coral garden and watching the reef go by like the world’s best nature documentary. Glide over pufferfish and hawksbill sea turtles, and check out in the blue every now and again for reef sharks, eagle rays, mantas, or even dolphins passing by.

If it’s slack tide or just turning, you have more time to explore under corals and in crevices to find Tatawa?s small hidden residents. For the observant macro-hunters, our guides are skilled at finding lionfish, cuttlefish, orang-utan crabs and more.

Image of lionfish courtesy of A. Voinigescu.

We couldn’t make a highlight selection of Central Komodo?s best sites without including its famous Manta Point.

This dive site is a smooth drift over a coral rubble moonscape, marked with rolling runes and dotted with manta cleaning stations at coral bommies.

Although manta ray sightings aren’t guaranteed here, the chances are good and the animals often curious to meet divers. When the mantas aren’t around, there’s still plenty to be found from turtles and reef sharks to bamboo sharks, giant sweetlips and more.

Find the right spot, and you can sometimes kneel in the rubble or reef-hook to a rock a few metres behind a manta. Then, take your time watching it move gracefully through the water, perhaps filter-feeding as it flaps its way through the current in slow-motion, or hovering by a cleaning station. 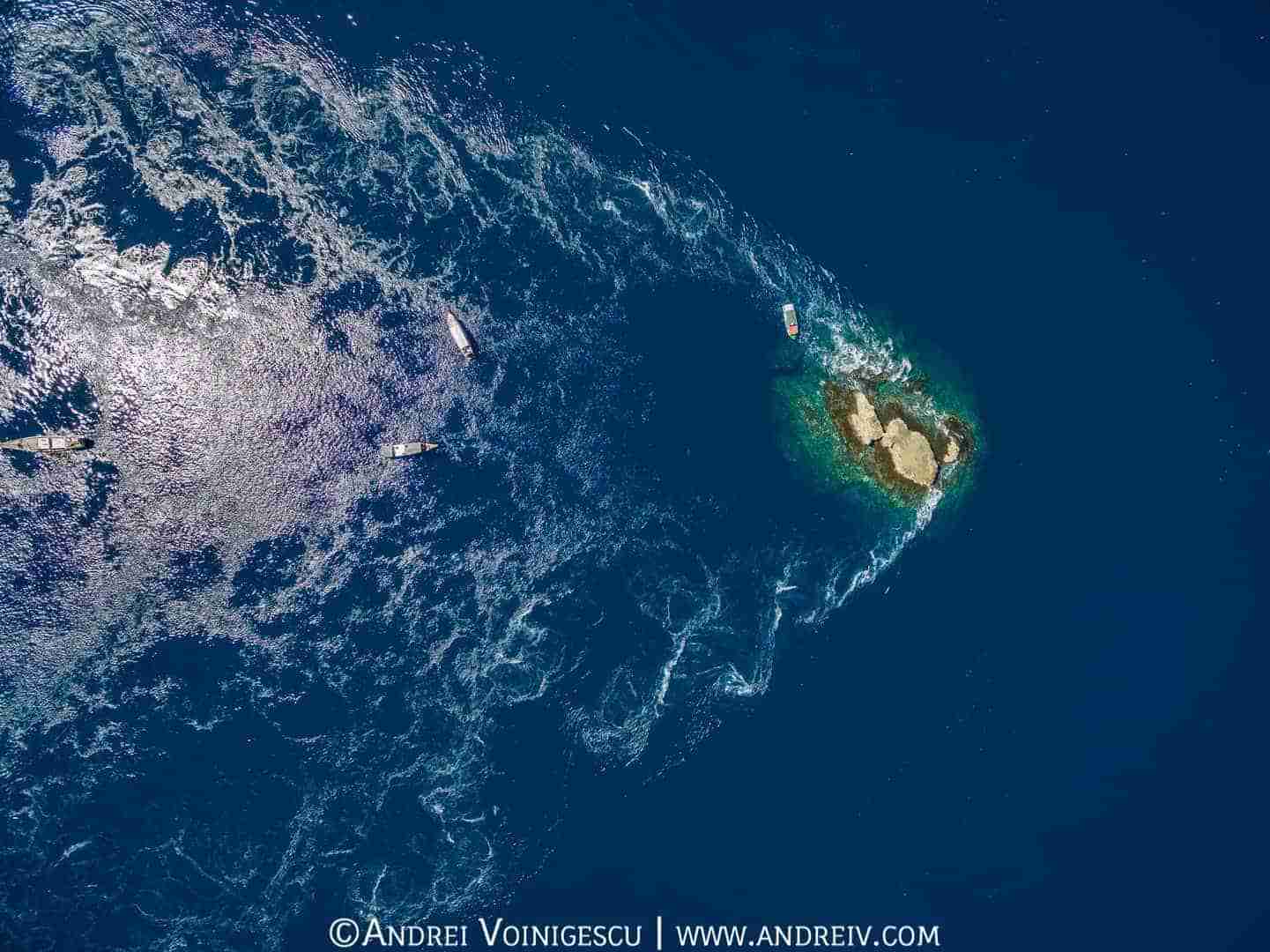 Regularly rated in the world’s top 30 dive sites, Batu Bolong is one of the most famous in the National Park.

This small isolated outcrop topped with a perforated rock may seem barren at the surface but is an explosion of life beneath the waves. On the rock?s protected side, fish swarm in clouds beside and around you bright blue fusiliers, small reef fish of all sizes and colours, Bluefin trevallies hunting amongst them.

Every inch of the coral wall is alive, with an incredible diversity of colour. Macro lovers and wildlife searchers will neither be disappointed nor become bored of this treasure trove: there are new species to be found every dive. Morays and octopus hide in holes and tunnels, lionfish and nudibranchs in cracks and crevices.

But those in love with the ocean’s giants will also be greeted by a sight to remember. At the edges of Batu Bolong and the blue surrounding it, the big fish hang out. You might come across giant sweetlips, eye giant trevallies patrolling the blue, or spot Steve the giant barracuda cruising along in the current lines. Hawksbill turtles often come to graze at Batu, and on occasion, divers have been mindblown by the sudden appearance of mantas or dolphins gliding in from the blue.

Most dive centres in Labuan Bajo run day trips to dive at sites in the centre of the National Park, including Manta Rhei.

On board our comfortable boat the Treebucca, we leave from Labuan Bajo to the National Park six days a week. We visit at least one of these highlight dives almost every single day, guaranteeing you won’t miss the very best of Komodo’s diving. Often, we’ll go to more than one highlight dive at once, such as on our Manic Manta or Aquarium day trips.

Because we go there so often, our dive guides are very experienced with these dive sites they know them like the back of their hand. They’re skilled at finding all the best and most beautiful creatures, knowing when and where to find their old friends.

Finally, for those who know Komodo well and are seeking to delve further into its secret spots, our liveaboards are the perfect opportunity to explore the National Park’s lesser-visited dive sites.